Cinema is a commercial field ....Collections give Happiness ........ Kareena Kapoor 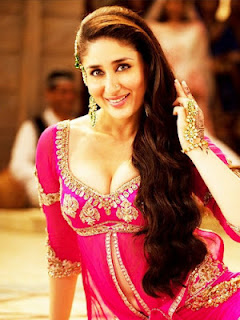 “It’s a sweet feeling whenever we get complements from fans and movie industry people. But waiting for the compliments for every movie is not a good habbit” said bebo babe Kareena Kapoor. Recent bollywood movies in which she acted like Ra. One and Agent Vinod got a positive response from audience but Kareena’s character didn’t get good response. But Kareena’s character Divya  got a good response from the movie Bodyguard and she proved once again from this movie that Kareena is the best artist. On this occasion Kareena Kapoor responded as above.
Kareena also said – “Cinema is a commercial field and acting in a commercial movies will have a bright future.When coming to women artists rarely they will get good roles in the movies and they will that it’s a very good offer for them. But some people tell that role like Divya in Bodyguard is good, why can’t choose that type of roles, how it’s possible? I think that the movie’s she acted should do well. And she don’t have feeling that her role in movie also should get good response, she knows how good her acting is. The people who seen the movies Chameli,Jab We Met,Bodyguard ... will come to know about her performance. Instead of bollywood icons think about her role demand in movie, she will be very happy if that movie has collected 100 crores. She also will not satisfy if the movie failed at box office even her acting got good feedback in the movie. Just bebo wants to taste the success of the movie.