She dont care the jokes on her in bollywood...... Sonakshi Sinha 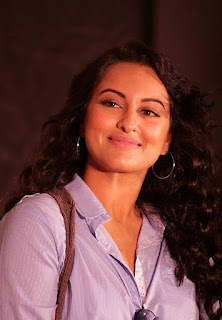 She is 20…He is 40 is the latest funny discussion oing in bollywood.These discussion in on the beauty of the dabangg movie actress Sonakshi Sinha.She is the lovely daughter of bollywood star Shathrugna Sinha.She debuted from the bollywood film with good flick from dabangg film starring with Salman Khan.And in this film she is acted with Salman who is twenty years elder than her.And now she is also going to act with Akshay Kumar in her latest movie who is also elder than her.And these tpe of jokes are coming on her recently.When asked about his to this beauty,she softly replied that “Anyone can make Jokes on her,she don’t care.If she acts with the same age of her she cant learn anything from them because of less experience in this acting industry.And by acting with senior actors will make her learn from them because they will share their experience with her.From dabangg movie she got lot of suggestions from Salman Khan and now from Akshay Kumar.She is very happy with her present situation and why other people are worrying about her?” said Sonakshi Sinha.