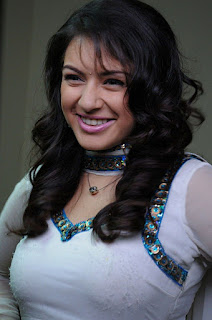 Hansika Motwani who debuted as a child actress from bollywood movies now a days not seeing in the movies. Recently this milky chubby girl got a offer from kollywood.Hansika said that for her money is not important, for that money she don’t want to reduce her image in industry. The offer this beauty got is to act in an item song in tamil film Rajabatlai in which vikram is playing lead role. The director and producer of this movie offered her nearly a 50 lacs  rupees for this one song. But Hansika rejected this huge offer smoothly.
Hansika Motwani said that since from entering in movie industry she don’t like item songs, and for acting item song in Billa movie it is just for because of Maher Ramesh.He is seeing her as a sister and because of Brother’s request only she acted in that song. And at that time of doing that masala song only she decided that it will be her first and last item song in movie industry.In bollywood if its aitem song it will be treated in different meaning but in tollywood and kollywood its treated as a vulgar song and cheap song.That’s why Hansika doesn’t want to lose her position by money.