Anushka Shetty ..with lots of movies this year.... 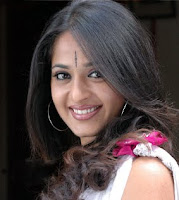 Bangalore beauty Anushka Shetty has became the top actress not only in tollywood but also in kollywood. After Anushka’s excellent performance in Arundhathi, Anushka not only praised for her beauty but also for her great performance in the movie . After big success of Arundhathi, Anushka had got lot of opportunities from both tollywood and kollywood. Recently under the direction of Krish, Anushka acted in “Vedam”, which is running successfully all over Andhra. Anushka had done different role in the movie and has been praised for the performance.

Present Anushka Shetty is paired up once again with Akkineki Nagarjuna for the third time under the direction of Veeru Potla. Another movie with Prince Mahesh Babu in “Khaleja” and other movie with popular actor.