Bollywood Beauties as sisters in the life story of singer MS.Subbalakshmi .......... 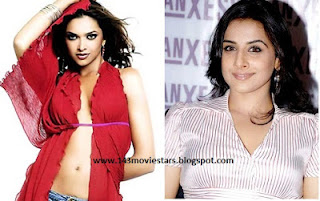 When we think of the address of the actress who is traditional and glamour in movie industry,then we will remember none other than Vidhya Balan.For this the example is Parinita and Dirty Picture movie in bollywood.In these movie Vidya Balan looked in traditional saree looks and in mini skirts which blown away the minds of the movie industry people and people.When speaking on Deepika Padukone ,she is a glamour doll and traditional girl too.And now specially why we are speaking on this both stars together is these glamour beauties are both acting together in the latest movie which is going to be directed by Rajiv Menon is the news.In this movie Vidhya and Deepika are playing a role of sisters.
This movie will be based on the real life story of M.S.Subbalakshmi who is a famous singer.Subbalaksnmi role will be played by Direty Picture beauty Vidhya Balan and Deepika Padukone as Vidhya's Sister.And Rajiv prepared the story that the two of their roles will have full justice.We know Rajiv Menon directed the movies 'Merupu Kalalu' and 'Priyuralu Pilichindi',both are released in tamil and telugu versions.After long time now he is back with this project with top most actresses of the indian movie industry.This movie will be made in English,Hindi and Tamil languages is the news.On other side for the character of Subbalaksmi Rajiv approached Aishwarya Rai but she rejected this offer is the news in industry,may be because of it will be like a art movie it seems.