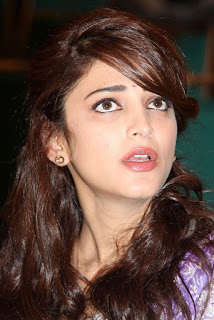 These days most of the Tollywood stars have their eyes on Bollywood. Shruti Hassan is the new entry into bollywood. The top South Indian actress Kajal Aggarwal has made her debut movie in Bollywood itself. As the movie proved to be a dud at box office she has tried at luck in Tollywood and became successful. Now she’s again here in Bollywood to test her stars again. With Singham she hit the audience eyes and continued her success ride in Bollywood with Special 26. Ileana proved her acting skills with Barfi! She even won the best female debut award. And adding to her success her next movie Phata Poster Nikla Hero is in post-production stage. Now it is Tammana and Taapsee. Tamanna ‘s movie Himmatwala is yet to release and she has already signed her next movie with Sajid Khan. It seems that her looks are already working wonders in Bollywood. Taapsee’s Chashme Buddoor is ready to release and should see what turn does Bollywood brings to Taapsee’s acting career. Now it is Shruti Hassan’s turn. She will be seen in two Hindi movies this season. Ramaiya Vasta Vaiya, the Hindi remake of ‘Nuvvostanante Nenoddantana’ is directed by Prabhu Deva. Shruti is cast against Kumar Taurani's son Girish Kumar. The telugu version of the movie was a huge hit. Let’s see what this time Bollywood has in store for Shruti. And this July, D-Day, Shruti’s next movie is reportedly based on heinous crimes of Osama Bin Laden and his story.  All are waiting for the winner of the Race to Bollywood. Let’s wish all the best for Shruti Hassan.