He is the real superstar in her life..... said Vidya Balan 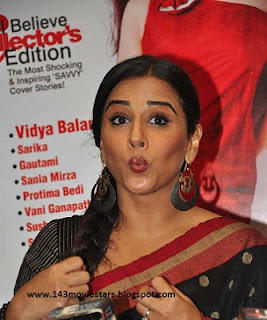 In her point of view Sanjay Dutt is the Super star said by one of the bollywood's top beauty.She is none other than 'Dirty Picture' girl Vidya Balan.This bollywood beauties photo was inaugurated for cover page of one of the magazine in mumbai recently and then Vidya spoke on the upcoming release of her movie 'GunChakker' and she is acting with actor Sanjay Dutt.During this occassion this beauty made the above statement.And she also said that till now she acted with most of the actors in movies but among them Sanjay Dutt is the super star and he holds that position.As we know that Vidya Balan acted with Sanjay Dutt in the movie 'Parineeta' and she had great experience acting with him.
When acting first time with him she felt some incomfortable and beside that he looks very energetic made her to fear on sets of that 'Parineeta' movie said Vidya.Though he looks like that his face will be cool and soft without any tensions,finally once again she confirmed that her superstar is only Snjay Dutt.GanChakker will be a full of comedy entertainment movie and once again Vidya Balan will attract the people from this movie.