Decided at the time of reading the ‘Krishnam Vandhe Jagadgurum’ script ......Nayantara 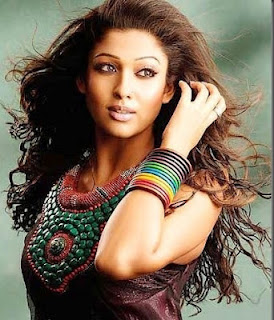 “After hearing the script only she decided to act in the film and i am having much confidence on this movie.In this latest tollywood movie my costumes are designed by Nishika Lulla” said the star actress Nayantara.Rana will be the hero of the telugu movie ‘Krishnam Vandhe Jagadgurum’ under the direction of Krish and Nayantara will be the female artist of this movie.On this her  latest movie only Nayantara said the above lines.Nayantara is playing a character of journalist in this film and she is doing this character with hard work.Almost after eleven months of gap she is coming in front of camera. Acting with Nagarjuna,Gopichand,Raana and with tamil hero Ajith in ‘Billa 2’ are the four movies signed by Nayantara which is the latest news and on the other side another hot gossip became hot topic in kollywood. The tamil actor Shimbu is composing a music and lyrics are written by him for his own musical album ‘Love Anthem’ for the sake of world peace.The hot news is that in this album Nayantara is going to act with Shimbu.
In past as we seen the romantic chemistry of shimbu and Nayantara in tamil movie ‘Vallabhan’ and it gave the full entertainment for movie viewers. And at that time only they both fallen in love and came upto marriage and duto to some reasons they separated. From then they both didnt act each other. Now Nayantara gave the green signal to act with her X-lover became the hot rumour.And talk in kollywood is that Is she acting with Shimbu on angry with Prabhu Deva or just its for the song of World Peace, they don’t understand.Shimbu is planning to release one by one song from now and by the end of this year he wants to release the complete album once.Whether Nayantara acted in this song or not will be confirmed only after releasing of this album only.