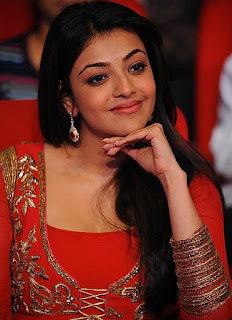 She saw the movie in normal theatre at dubai and in one of mass theatre in mumbai.And in these two places the movie got a good response.Businessman movie is a good example that its a movie for all kind of people i.e. from mass to class.In this telugu movie she acted as an artist.In childhood she is used to draw dolls on walls and scolded by her mother .And she remembered all these things while doing this tollywood movie.The character in the past movies made her feel like a 'Girl Next Door'.But in this Businessman movie she will look as a trendy and stylish girl.Overall enjoyed the role of her in this movie.PuriJganaath will also maintain a discipline and friendly at shooting locations... said the successful actress Kajal Agarwal.
When asked about the acting in the lip lock scente between Kajal Agarwal and mahesh Babu-Kajal  replied “Why pointing to that particular scene in that movie,she didnt understand.These scenes are common between lovers in life.But its just in a cinema they are both lovers and situation demanded that kissing scene.This scene had shooted with a esthatic.And said that while doing any scenes she will remember her family members and she will not hurt them.She didnt have any objection of this scene in movie thats why she acted in that romantic scene.”
This 2012 telugu mvie Businessman movie is goign to be remaked in bollywood.When asked with which actor she wants to act in hindi movie-Kajal said that Mahesh acted very good in a Surya Bhai character in this movie.She is not thinking of any actor right now.She liked his acting very much.
Finally,Kajal Agarwal said that she is acting in tamil, telugu  movies Thupaki and Maatran.And she signed for one movie with Ram Charan and Jr NTR,shorlty Kajal is also going to sign a bollywood movie under one the famous banner.