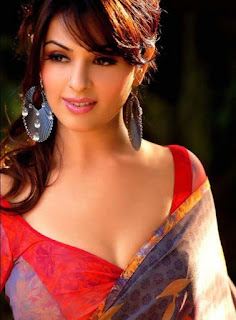 She had bulk of offers from tollywood and wants to show her talent in new year 2012, said by the tollywood movie actress Anjana Sukhani.This star has acted along with Raviteja,Sreya Saran in the telugu movie Don Seenu. And the above statements are said by her during her visit to Hyderabad for new year celebrations. After acting in Don Seenu she got good offers in tollywood industry but due to lack of nice projects, she refused the offers. During that period Anjana got offers in bollywood and kollywood. At present she is concentrating in telugu movies, that’s why busy in learning telugu language.
Anjana Sukhani tells that, unforgettable sweet memory in her life is to act in the Cadbury Dairy Milk Chocolate advertisement. Because she acted with Big B Amitabh Bachchan and she is thinking that it’s a dream. Personally she is a fan of Amitabh and he also knows that, He loves his fans very much. That’s why on day of her birthday every year Big B will tell wishes to her. At present acting in hindi movie which is remake of telugu movie Don Seenu and the same role is planning as in telugu movie.