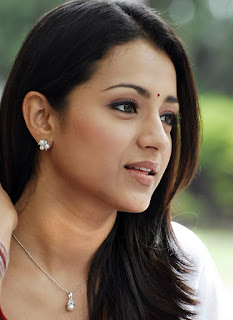 Trisha Krishnan is short of half a dozen movies for her to reach half century.Rightnow she is doing film with Venkatesh,Jr Ntr’s telugu movie Dhammu and with Vishal both in telugu and tamil movie Samaran.So including the above movies trisha completed her 44 movies in tamil,telugu and Hindi languages and just short of six movies. Trisha speaks on this,”On that day if she didn,t take her decision she will not be in this position now. After her first debutant Tamil movie Lesa Lesa failed at box office and this is her first time failed in her life and decided to quit from the movie field and to concentrate on her studies.Next day after taking the decision, got lot of phone calls saying that your performance is  excellent and acted as a experience actress, you had a bright furure.Then after hearing I became so happy, though movie got flopped her performance made her to reach her dreams.So,from there I decided to act in movies with good support in movie industry.