She dont want ro repeat the things happened in past ....Tapsee 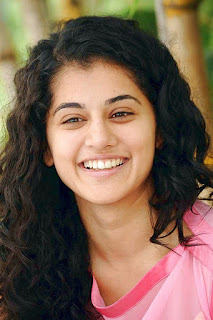 People are living for their desires and wants. Without needs there is no meaning of life. Wanting and disappointments are common in everybody’s life….these are the lines said by the tollywood’s glamorous and romantic actress Tapsee.”Though acting with top actors, working with wonderful great directors and getting huge and big offers with remuneration will not lead to success, the time should be good”.Tapsee said ,she is acting up to her top performance and involving in the character and she is working hard to give the life to that role.And when coming to success and failures its all with Gods Grace only.These are the statements given by tapsee at one of the kollywood Television channel program.
When asked about that she is shifted to Chennai recently,Tapsee said that Kollywood and tollywood are both important for her,that’s whu she will shift to Hyderabad or Chennai depends on the movie.She is getting good offers from telugu and tamil films,but these days she got disappointed in choosing the movies.Thats why she is now selecting the movies carefully.Shortly,she is going to act with Vijay in one of the tamil movie which is directed by Kannan and it’s the remake of the bollywood movie Delhi Belly,said Tapsee with cute smile.