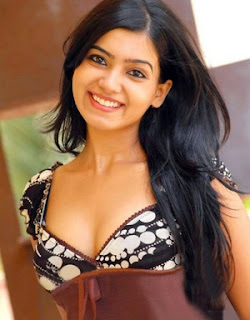 Samantha a top tollywood actress now a days praising  director Goutham Menon who is the director of her first debut movie Ye Maaya Chesave.This movie created records and gave a good name for Samantha.if any situation comes for her to talk on Goutham Menon ,she is praising him a lot because withouthim she will not be in this popular stage in short period.Samantha had a good hit with her latest movie Dhukdu with Mahesh Babu.Now she is busy with tamil movie Neethane En Vunvasantham in which Jeeva is playind as actor.
This movie is under the direction Goutham Menon.When media asked about this movie she started praising Goutham and saying that he is so cool,because of that only she did a great performance in Ye Maaya Chesave movie though she doesn’t know telugu.This latest upcoming movie is also going to be release in telugu and Malayalam also.And also said that she is also going to become famous in Malayalam also.After the success of Dhukdu, Samantha signed for Rajamouli’s movie Eega , Nagachaitanya’s film Autonagar Surya and Dilraju’s Seethamma Vaakitlo Sirimalle chettu and Vade movies.So,after this tamil movie Samantha will be busy with tollywood schedules.