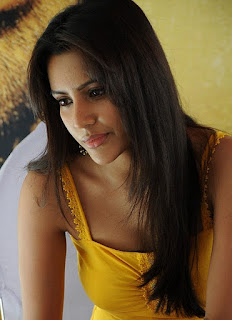 Priya Anand gets crazy project recently this and she tweeted this news on her twitter.And from then onwards some people in media and her fans are waiting what is that crazy project? The cute priya also didn’t inform this project and kept in suspense. And now she finally announced that crazy project that she is going to act with the glamorous star of Indian actresses Sridevi.AS we know after longtime sridevi is coming on to the sets and that to from the bollywood movie English Vinglish.
Priya Anand feels very happy after knowing this news that she is going to act with the star actress Sridevi.Priya tells that she is a big fan of sridevi and got inspired from her only in movies and that too priya feels lucky. From news paper I came to know that sridevi is coming on to screens and she became happy. And she doesn’t know that she is going to act in that movie with sridevi and it may be sweet shock to gorgeous priya. As we know priya anand is a sweet and glamorous actress in tollywood and bollywood.
Priya remind that she attended a photoshoot in wet saree.The saree is in blue color that sridevi wore in her movie Mr India which increased the heartbeat of her fans, in which she showed her beauty to viewers. Now priya also made this sensation for cover page of one magazine. The upcoming bollywood movie English Vingish is directed by Balki’s wife Gouri Shinde and it is also going to release in tollywood,kollywood languages also.