Meera Jasmine is coming to Thrill in and as Moksha 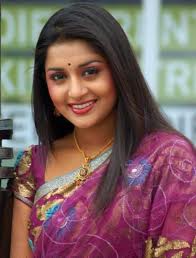 Malayalam beauty Meera Jasmine is long way back seen in tollywood,its almost a one and half year back she acted in telugu films and also news came that she will be away from tollywood.And for these rumors Meera is giving a answer shortly.Yes she is acting in the latest tollywood movie MOKSHA under the directed Sreekanth Vemulapalli.The audio of Moksha movie is going to be released shortly. This ,movie will be a compete lady oriented film.The Director and Producer speaks on this movie,”It’s a story of a girl’s life with unexpected incident happens in her life. This will be Meera Jasmine is acting in first lady oriented movie and will be looking in different character then she did never before. This Moksha will be a horror and thriller based film. This type of story didn’t come before in cinema industry and movie will give thrilling experience to audience with musical hit.”