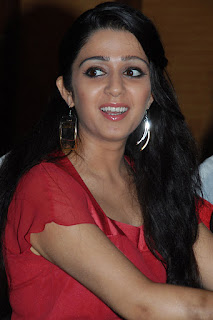 Charmee who debuted in bollywood movie Bbudda Hoga Terra Baap in now ready to work with another bollywood movie with Vivek Oberoi in film Jilla Ghaziabad.But recently news in media that Vivek Oberoi rejected Charmee and wanted to replace her with another actress.When this news came to charmee ,she replied that ..”She is not in position to reply that answer because its all false news and I don’t want to worry about this news.You know that I am calmly doing my movies without any problem but don’t know how this rumor spread because I am doing in this film,she and Vivek Oberoi didn’t control their laugh after hearing this news”…said beauty Charmee.Since long time the rumors didn’t come on Charmee,As she became a big star in movie industry ,that’s why these rumors are coming and it became good for her also that it became a free publicity for her next bollywood movie Jilla Ghaziabad.Charmee is going to look glamorous with Vivek in this movie.Anyhow she got this position from tahts why she dont want to loose telugu people and soon she will look in tollywood movie..said Smiling Charmee.