Its A Thrilling Experience to work with family members...Kajal Agarwal 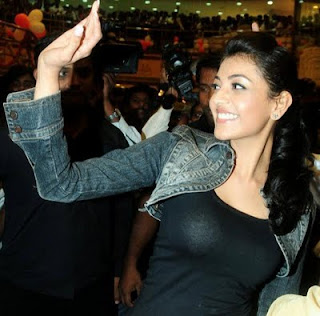 Kajal Agarwal is ruling the south Indian movies now a days.Recently she is introduced to bollywood industry from movie Singham,though her role doesn’t seems to be strong,the movie got good response.“It’s a sweet and pleasant to act with members of one family…” said by this glamorous beauty.This girl is now a days busy in tamil film industry.Recently she acted in tamil movie “Naan Mahaanalla” with Karthi and now doing film with his brother Surya who is one of the rock star in kollywood.Surya and Kajal are acting in the movie “Maatran” and Kajal expresses this feeling during the shooting of that movie.
Previously Tapsee was selected for this role but due to her busy schedule replaced with Kajal.She also said that both Karthi and Surya are great actresses in india and have great talent and they have more dedication at shooting.This made them great stars in movie industry.She wants to learn lot from them.Kajal said that she worked with other family members like Allu Arjun And Ramcharan Teja,Karthi and Surya.And Kajal said already worked with Jr NTR and Nagchaitanya,if she gets offer to act with Nagarjuna and Balkrishna it will be a good credit for her.