Sonakshi Sinha Will Be Busy With South Indian Cinemas ........ 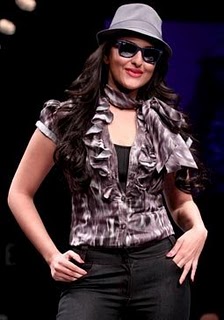 Sonakshi Sinha became a star by her debut movie Dabangg is at present busy with Akshay Kumar with movie Joker.And also she is also busy for her future projects Race sequel movie,Kick remake of tollywood and with south Indian star Kamal Hasan for tamil movie Vishwaroopam.Not only that recently news came that she is acting with Surya,Shimbu for kollywood movies and with Venkatesh for tollywood movie.When asked about her interest in opting south cinema sonakshi said-“She is an artist,she don’t hace any reginal feelings.At present southern cinemas are competing with bollywood now a days that’s why choosing south Indian cinemas with star actors and said she signed for four south Indian movies”.And also said that acting first south Indian movie with Kamal Hasan in Vishwaroobam is lucky and great.And she is waiting eagerly when this will go on sets.And her upcoming movies Joker with Akshay Kumar and Vishwaroopam will be great movies for her.