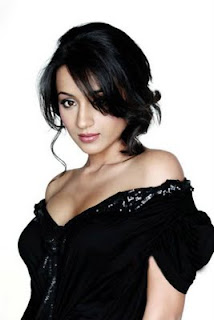 Trisha Krishnan who entered I tollywood and reached top position In very short period.These days rumours on her marriage spreading in movie industry. When asked about this rumour she gave lovely mile on her beautiful lips and said that after completing her 50th movie she will get marry.Now she is busy with Ajith in “Mankatha” .This is Trisha’s 40th movie in indian cine industry and she also said she got goals in her life like she wants to play a role as till now no actress did it,other one is that after disaster in the bollywood movie she wants to become a top actress in bollywood industry and wants to act with south Indian star Rajinikanth and finally with Maniratnam as solo heroine.Trisha almost acted with all south Indian stars except rajnikanth and also acted in maniratnam movie “Yuva” which had three actresses.So after all this she is getting married.Trisha is busy with Ajith movie in tamil,in telugu with Venkatesh and in kannda movie “Bul Bul” and also signed for two bollywood movies.