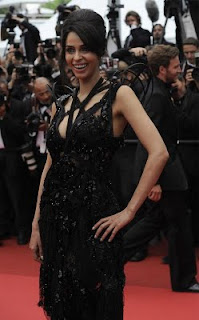 Mallika Sherawat who is known to be a sex bomb of Indian movie industry is now a days is not seen.Recently this hot actress participated in the Canne’s Film Festival .She is wearing a black dress which is transparent and attracted with her cat walk.And most of the people shocked by her dress.though it looks casual in outside Indian but as per the Indian tradition it became issue.So bollywood people saying that she will pay price for that and news that some people are going to court on her costumes.When said to Mallika about this issue she said – If anyone wants to go to court  , go happily and she is not worried about that.Mallika said why people are behaving like this on her and sadi most fo the actress at different programs wore these type of dresses ,why people complain then.She said she got proofs of the other actresses and they will come on road.So Mallika gave small warning to the people who are against her.