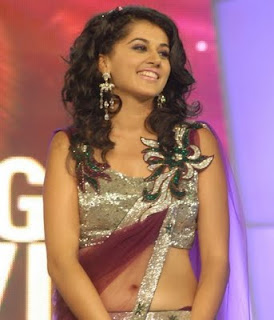 Tapsee who became a stardom after the succeccful hit of Mr Perfect movie is busy with the latest upcoming movie Veera.The movie is casted with the actor Raviteja and too with Kajal Agarwal.Under the direction of Ramesh Verma  and banner Shanvi Productions is in final touch of the movie.The movie Veera is produced by Ganesh Indhukuri.This will be raviteja’s mass entertainer movie and acting as a dual character role .Kajal will bea playing as a Kabaddi Chitti and first time she is acting a full length mass character. When coming to beautiful tapsee as a IT student. The songs of the veera movie are shooted at beautiful locations of Europe.Director said –This movie will be raviteja’s sensational movie in his career.Beauty Queen Sridevi is playing as guest role and other casting of movie is Nagbabu,Roja,Rahul Dev,Pradeepravath,Supreeth and prakashraj.The music of movie Veera is composed by Thaman.