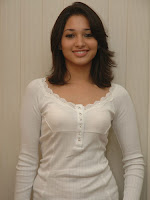 Tamanna has became super star in the kollywood within the short period. tanil industry gave her the name Milky White girl.Tamanna’s upcoming movie in tollywood is Badrinath with Allu Arjun and another movie with Naga Chaitanya. These two movies were produced by Geetha Arts. In Kollywood Tamanna is acting in the remake of Ravi Teja’s “Vikramarkudu” with Karthi, Awara fame.

Tamanna says that she never bothers about the rumours on her. Tamanna will daily search for the rumours which are printed in media.